For those of you who have outstanding orders with us, thank you so much for your patience as we hammered out the last issues on this second manufacturing run.  Delays can be frustrating, but if you’ve been waiting for a Mooshimeter your wait will soon be over!  The first 50 units of the manufacturing run shipped today, existing orders should all be out this week.

Final assembly for the first manufacturing run back in January was done here in San Francisco CA in our lab/office space.  This is ideal for figuring out the first production run of a product, but not good as a long term plan.

Sencore in South Dakota, who did fantastic PCB assembly work for the first manufacturing run, is doing final calibration and assembly for this run. A lot of the work of this second run has been encapsulating the calibration and testing processes to the point where they can be done by people who didn’t design the Mooshimeter.  We had some customs delays in getting them parts and a few hiccups getting them up and running, which I mentioned in this blog post, but we’ve worked our way through and have a whole new stock of Mooshimeters!

Here are a few shots from the manufacturing floor:

And a quick video panning the space:

A new firmware version is available!  Under the hood there some improvements to power saving, but the most noticeable upgrade from a user perspective will be that the new firmware logs directly to CSV instead of the binary format.  This should make logging much easier to use.

For Android, download the updated app from the app store and connect to it while it’s booting as shown below.

You can see a demo of the new logging format in my last blog post, where I characterize a AA battery sample from our battery supplier.  From the user’s perspective, all that’s changed is that there’s no longer the intermediate step of running CONV.PY, the conversion script, to convert the binary logs in to a usable format.  The meter now logs directly to timestamped comma separated  value files (CSVs).

Why was the data in such a strange format to begin with?

The original idea behind logging in a binary format was to reduce the amount of data being written to the SD card, which saves SD card space and power.  But the conversion process from binary to CSV was an annoying extra step that actually proved quite troublesome.  The conversion process required running a python script, but some users weren’t familiar with the tools or didn’t have sufficient privileges on the computers they were using at work to install what was required.  So from here on out we’ll be sacrificing a marginal benefit in SD card space for a substantial increase in usability.

A new version of the Android App is in the play store with some substantial upgrades, the biggest being:

For the blow by blow of everything that’s changed, check out the github page. 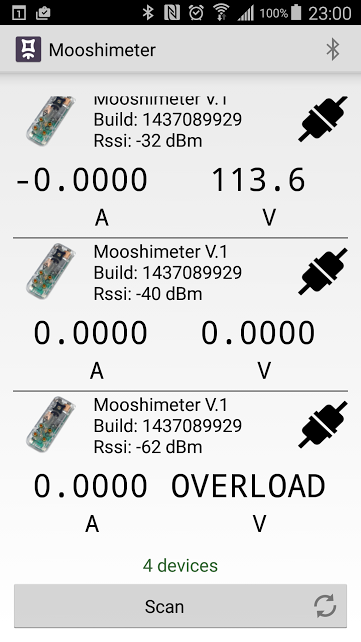 The updates are being ported to the iOS app as well, more on that as it develops.

We’re over the hump of setting up a new manufacturing pipeline, which should mean more time for app updates and communications. Another popular user request has been thermocouple support in the apps, which we should have time to get to now.

That’s all for now, thank you!