Wow it’s been a while. In 2017 I took on too many contracts at once and totally lost control of my time. Once I fell out of the habit of posting in the blog, the barrier to posting again became progressively higher, because there was more and more to catch up on. In the interest of getting back into the habit, there’s going to be a pretty radical tone shift. In addition to Mooshimeter support, I’ll be writing about whatever I’m working on and allowed to talk about, or just projects that I suspect you would find interesting.  So as a way of saying

I’m going to talk about a personal interest project I built in December of 2016 but never wrote up. The device is called a Kelvin Dropper. It’s a high voltage electric generator powered by falling water. They have no moving parts except for the water itself (although I built mine with a water pump for continuous use).

The electrical generation is pretty neat, but it was the behavior of the charged water that I wanted to emphasize because it’s beautiful. Watch the video below – it’s in slow motion to make the droplets easier to follow. They’re going into decaying circular and spiral orbits around the wires.

So what’s going on? The droplets are charged to a high voltage, as are the rings they are passing through. They are charged with opposite polarity, creating an electrostatic attraction. You can achieve similar effects with a charged balloon.

But how does the moving water separate the charge? The Wikipedia article explains it in better detail than I will here. But basically you arrange two electrodes so they induce opposite charge on two streams of water, which is then harvested by the other electrode, creating a positive feedback loop.

There are two big gotchas constructing this device.

The first is that the voltages are very high but the currents are vanishingly small, meaning charge leakage is a huge issue. You have to be really careful in your construction and stick to plastics wherever possible.  I built this out of PVC and fishing line because they’re both excellent insulators.

The second is that you need to have good control over where the stream of water separates into droplets. I played around with a couple different emitter configurations and found that a smooth, laminar flow with carefully controlled pressure was the only way to get good behavior.  The stream needs to separate into droplets right above the electrode.  The amount of charge doesn’t change significantly once it’s disconnected from the stream because it’s airborne with no path for current to flow, so you want it to separate at the point of maximum induced electrostatic charge.

The final construction that worked well for me was PVC pipe, fishing line, plastic funnels and wire. I used a cheap fountain pump powered by 4 AA batteries with a surplus elevator button to control it. For pressure regulation I built in an overflow pipe with adjustable height.  The overflow pipe is important because it makes the pressure at the emitters insensitive to the vagaries of your pump and batteries.  The emitters were roughly 1mm holes drilled directly into the wall of the PVC.  The edges of this hole are very important to get smooth flow – since they were near the end of the PVC pipes I was able to deburr them from the inside before putting the end caps on.  I chamfered them from the outside until the flows looked even. 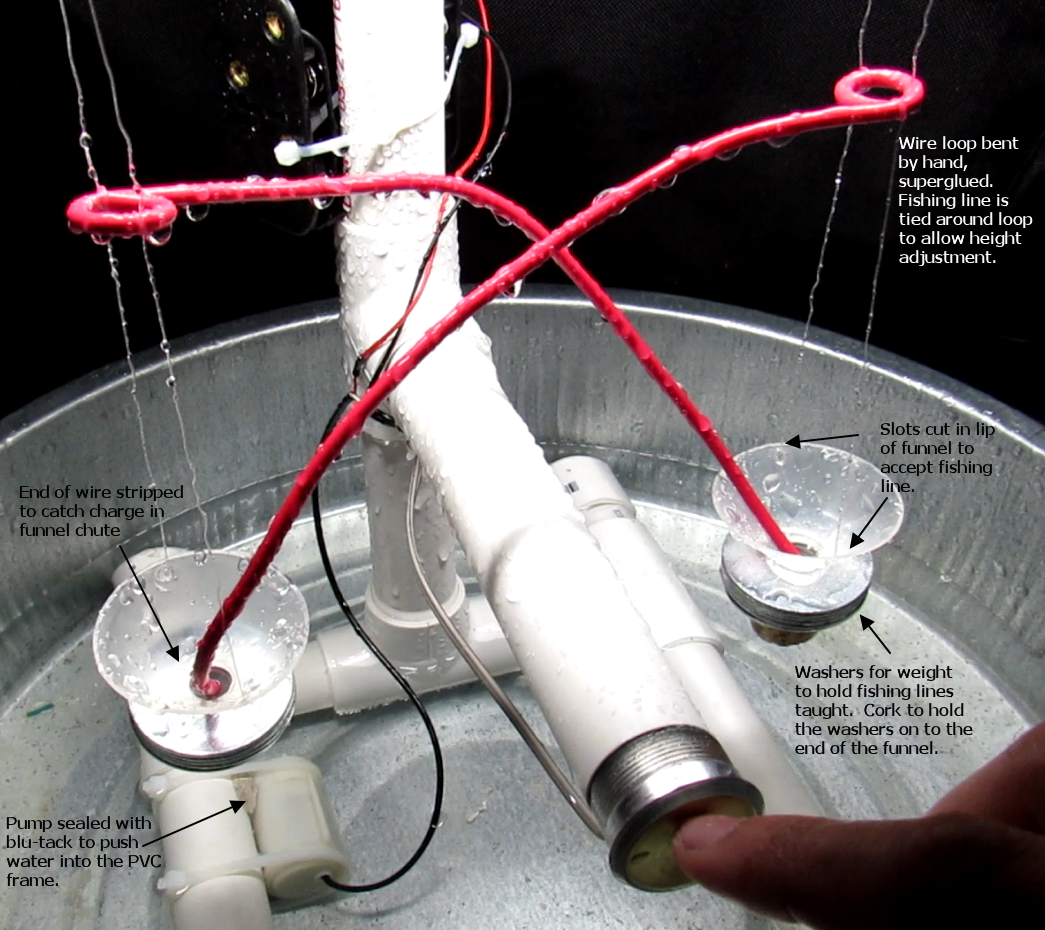 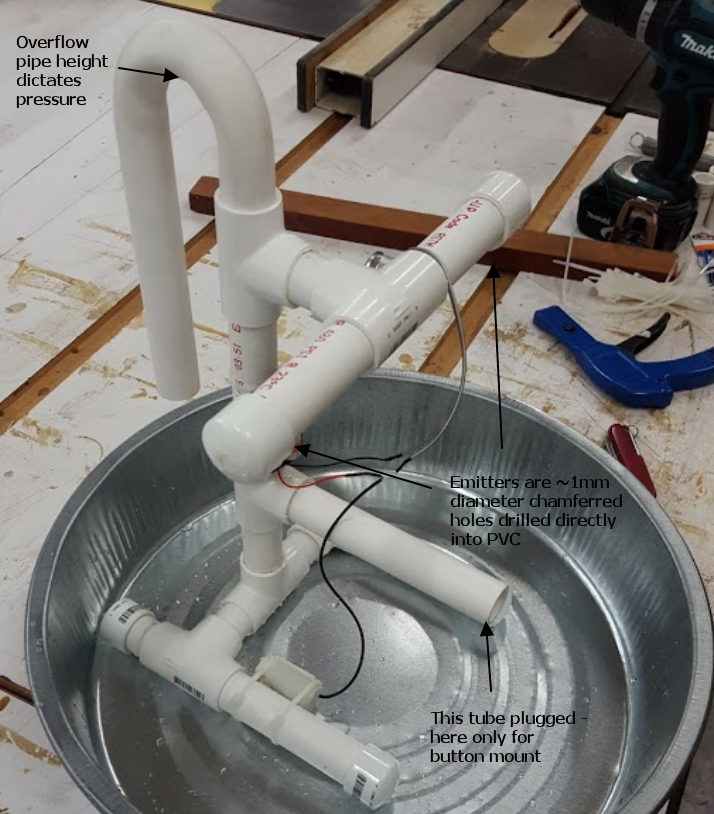 I did another quick video that shows the whole device a little more clearly as well.

These pictures are bad, why can’t you take new ones?

Because I am a dunce and lost this machine.  Mooshim Engineering had to move offices this year and my Kelvin Dropper disappeared at some point, I think it got thrown out in the move.  So I’m digging through the pictures I took when I constructed it, and it turns out I didn’t take many.

Anyway, if you want a fun weekend physics project that doesn’t require anything beyond hand tools, build this and send me a picture!  Hope you find this post useful.