What kind of device do I need to connect to the Mooshimeter?

Regardless of brand, your device must have hardware Bluetooth Low Energy support.  This is sometimes listed as:

For iOS:  Presently iOS 7 and later are supported.  iOS devices with BLE support include:

For Android:  Android devices with hardware BLE support and Android 4.3 or later are supported.  This includes most Android phones released later than mid-2013, but you should check the specifications for your device.

My meter is not appearing in the scan list.  What’s wrong?

Your meter may be in shipping mode.  All meters are shipped with their radios off because of postal restrictions on active radios.

To take your meter out of shipping mode, connect the O input to the C input and wait 10 seconds.  The meter should flash long, solid blinks for a few seconds when it wakes up.  It should now be visible from the app.

Is the LED off completely?

The most common causes of this are:

What PIN code do I need to connect to the meter?

Why I am getting a “Parse Error” installing on Android?

If you are trying to install the Android app from the APK file (not from the Google Play Store) and are receiving an error like this: 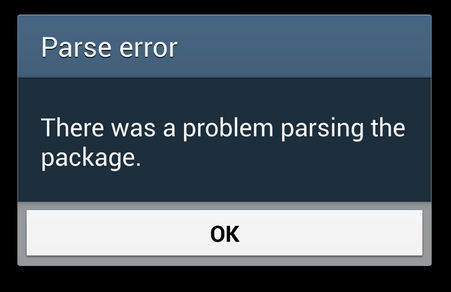 It usually means that your Android version is out of date and incompatible with the Android app.  For more information on compatibility requirements, see “What kind of device do I need to connect to the Mooshimeter?”

My meter is stuck in the bootloader! How do I get out?

There is a known issue that the bootloader will silently fail to update the application firmware if the batteries are too low. Try replacing the batteries on your meter and uploading firmware again.

Android’s bluetooth low energy connection is also generally less reliable that iOS, if you have access to an iOS device we suggest using it instead of Android to perform the firmware update.

How do I update the firmware on my Mooshimeter?

How do I turn the meter off?  Do I need to put it in hibernation every time I’m finished using it?

When you are done using the Mooshimeter, you don’t have to do anything special, just return to the home screen on your phone.  The AA batteries have enough power to keep the Mooshimeter connectable in standby for over a year.

“Hibernation mode” is a mode where the radio in the Mooshimeter is turned off and the meter must be awoken by connecting the Ω and C terminals together.  You probably received your Mooshimeter in this mode.  This mode exists not to save power, but to comply with international shipping regulations.  Most carriers do not like shipping active radios.  For this reason “hibernation mode” is being renamed “shipping mode”.

Why is the SD card slot blocked?

You may notice that there is a slot in the side of the case for the SD card, but that it’s blocked and the case must be opened to access the SD card. This is due to a safety issue that arose after the molds were already cut. You can read more about the test and the decision to close the slots in this blog post.

I dropped the Mooshimeter and the batteries got hot and died. What happened?

Due to the compact nature of the Mooshimeter, a sharp blow to the end can cause the batteries to fail internally. This results in the battery self-discharging and heating up. This does not damage the Mooshimeter, if you wait for the battery to cool down and replace it, your meter should be fine.

The meter is trapped in bootloader/firmware update mode, and the app keeps uploading repeatedly. Why?

How do I change the batteries?

The Mooshimeter has two screws holding the case together. Remove the two screws and separate the two halves of the case. Then grasp the PCB near the measurement terminals and pull off the top half of the case. The AA batteries should now be accessible.