What users are saying: 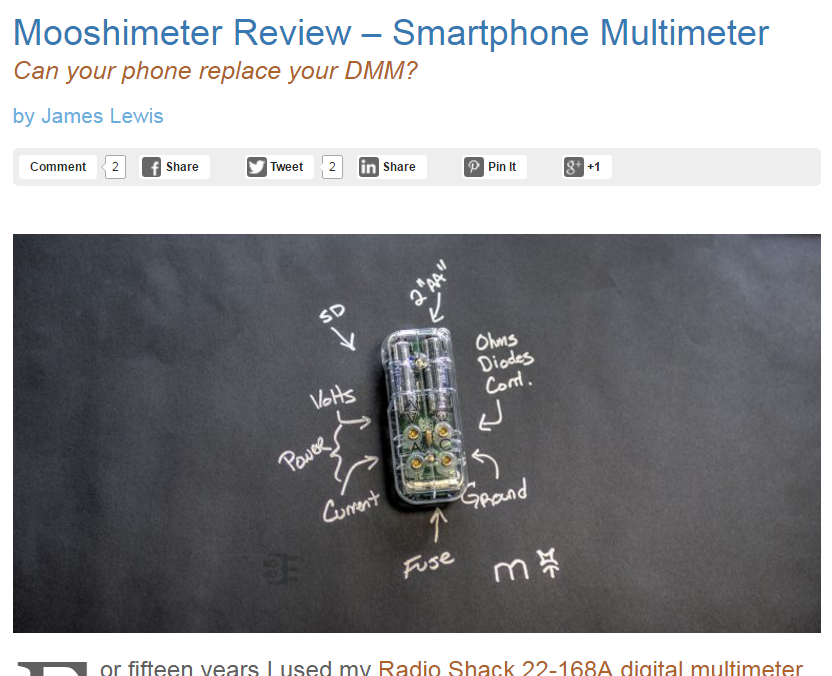 If you need a data logger for electrical measurements, then obviously this is your tool. Another key use model is if you want a portable DMM to throw in your toolkit. You don’t need to worry about scratching the screen, and the compact size takes up very little space.

Which is the reason why my Mooshimeter will always be in my kit. 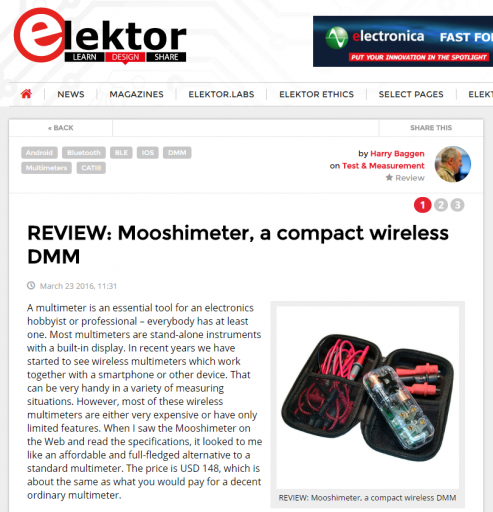 The Mooshimeter is an instrument with outstanding specs and unique features, the price is reasonable, and I would not hesitate to buy it for my own use 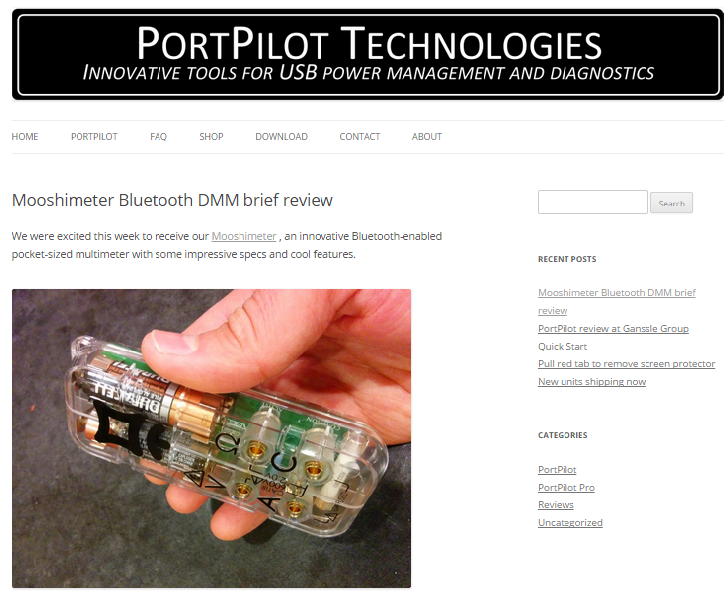 To summarize our initial impressions, the Mooshimeter provides a wealth of cool features along with precision measurements, in a sturdy, novel form factor at a reasonable price, which in many common applications promises to replace two more expensive DMMs.

I am a mechanical designer and control systems tech, I took my Mooshimeter with me to a service call I made today and used my meter. IT’S ABSOLUTELY AWESOME ! I was able to watch the control voltage input and use the trending to match changes to drive output and correlate with input. I showed it to my customer and he is interested in buying them for his maintenance staff for use as meters so his techs can troubleshoot with the cabinet doors closed for safety and as dataloggers for troubleshooting his production lines, This was very exciting and  I think you guys have just set a very high bar indeed for FLUKE and other manufacturers to meet in portable electronic metrics devices. 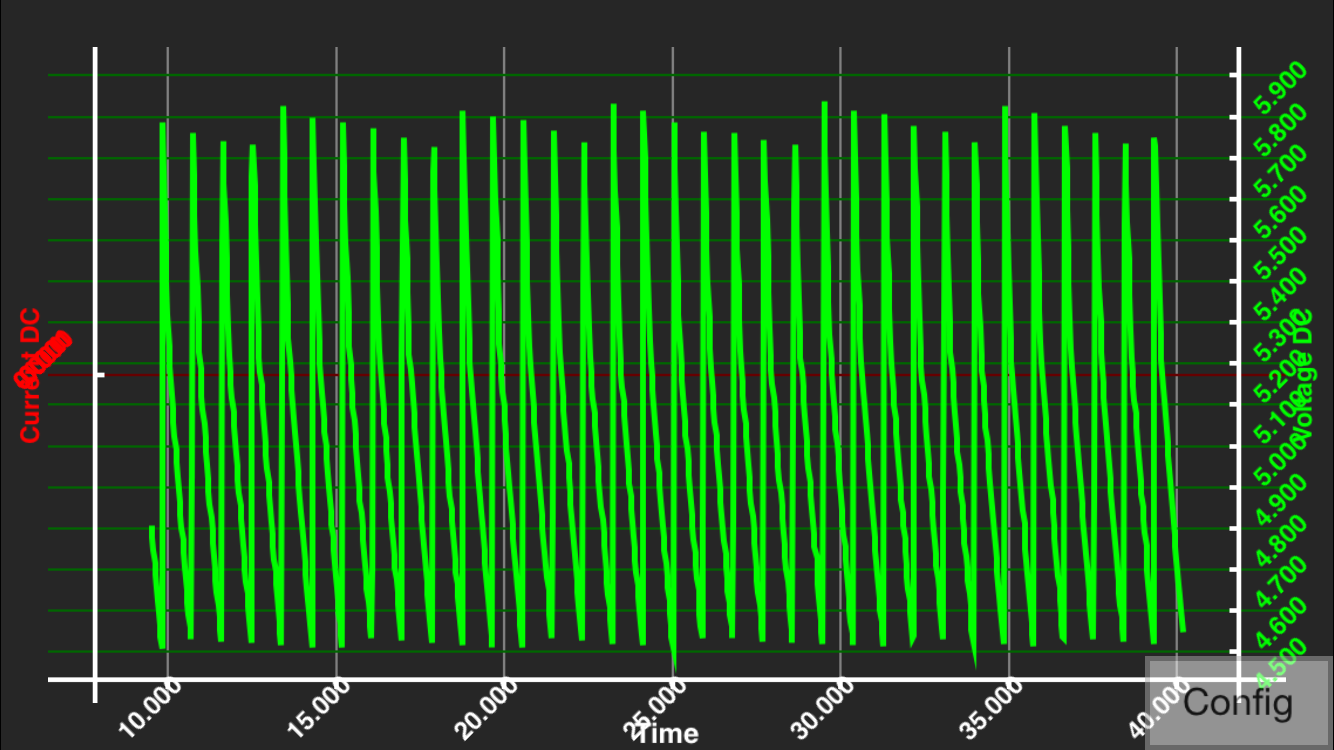 I wanted to show you how my Mooshimeter explicitly told me how bad a power supply was. I bought a 5vdc 10a power supply off ebay. I put a regular meter on the output and it jumped around, 5v, plus/minus 0.5v or so…so then I used my Mooshimeter and graphed the output (attached). Holy crap. The output is totally borked. I was able to send this screenshot as proof to the seller that it was defective and they’re refunding my money.
THANKS for such an awesome product! My friends are jealous; they want one, too :)
-Seth

I have made many different data logging measurements with the mooshimeter.  Most of them have been power measurements.  I have measured the total energy stored in my flash light batteries (power over time).  Whole house power using current clamps in the fuse box and 240V measurement.  The picture shows power measurement of the solar panels in my car.  I have two 20 watt solar panels connected to a dual battery charge controller (one for the car battery and one for an auxiliary battery show in the picture).  I also included a picture of the measurement with the auxiliary battery being added around noon which increased the solar panel power usage since the car battery was already charged.  I’ve used the mooshimeter to data log refrigerator temperatures and thermocouple voltage changes.  I would recommend the mooshi meter to someone that wants an inexpensive way to data log power measurements.  I also own a fluke 189 and 289.  While it is possible to use a computer to log power with two fluke meters (without having to worry about internal storage limitations or synchronization issues when the meter are used stand alone), it is much more convent to use the mooshimeter and log data to an SD card. 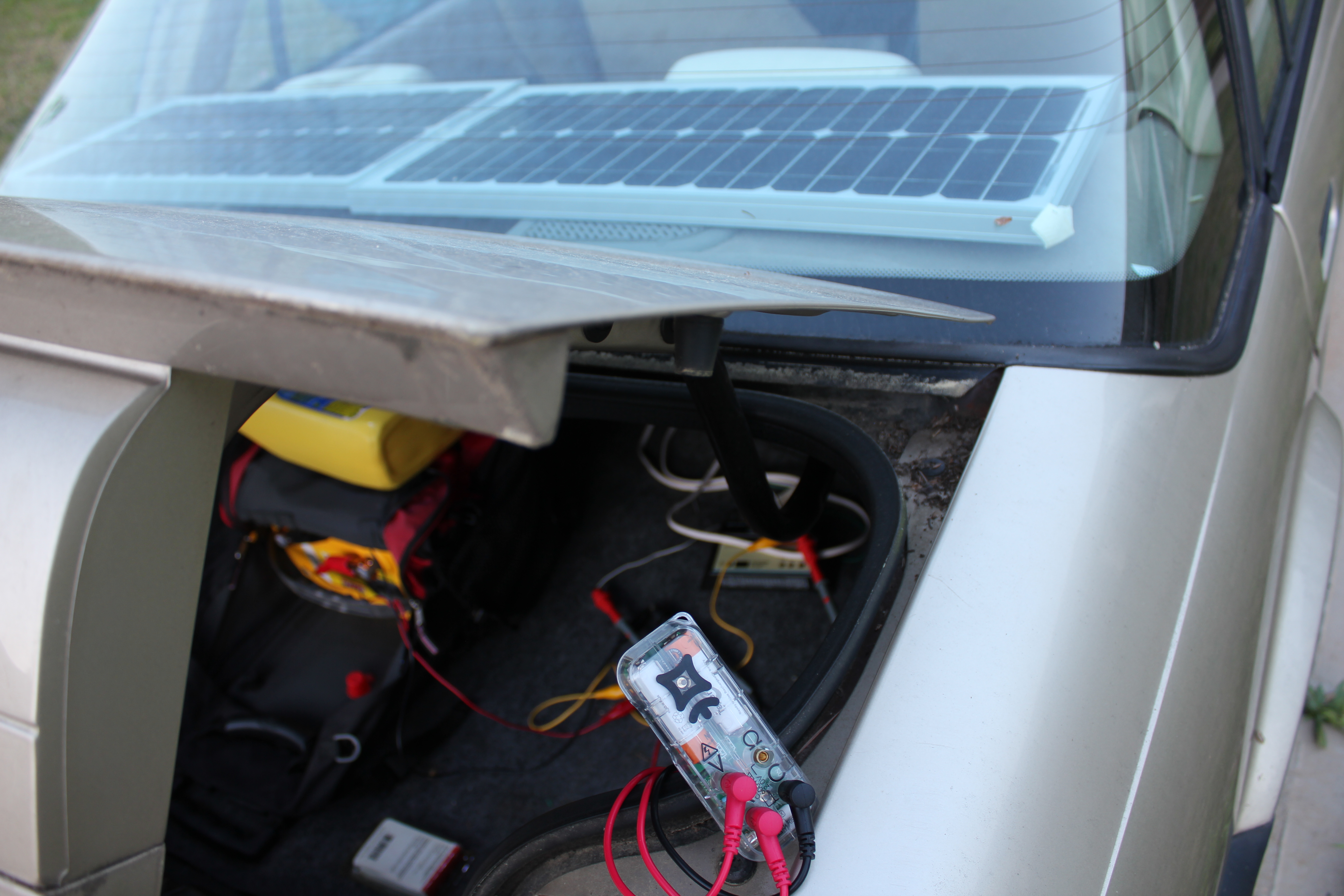 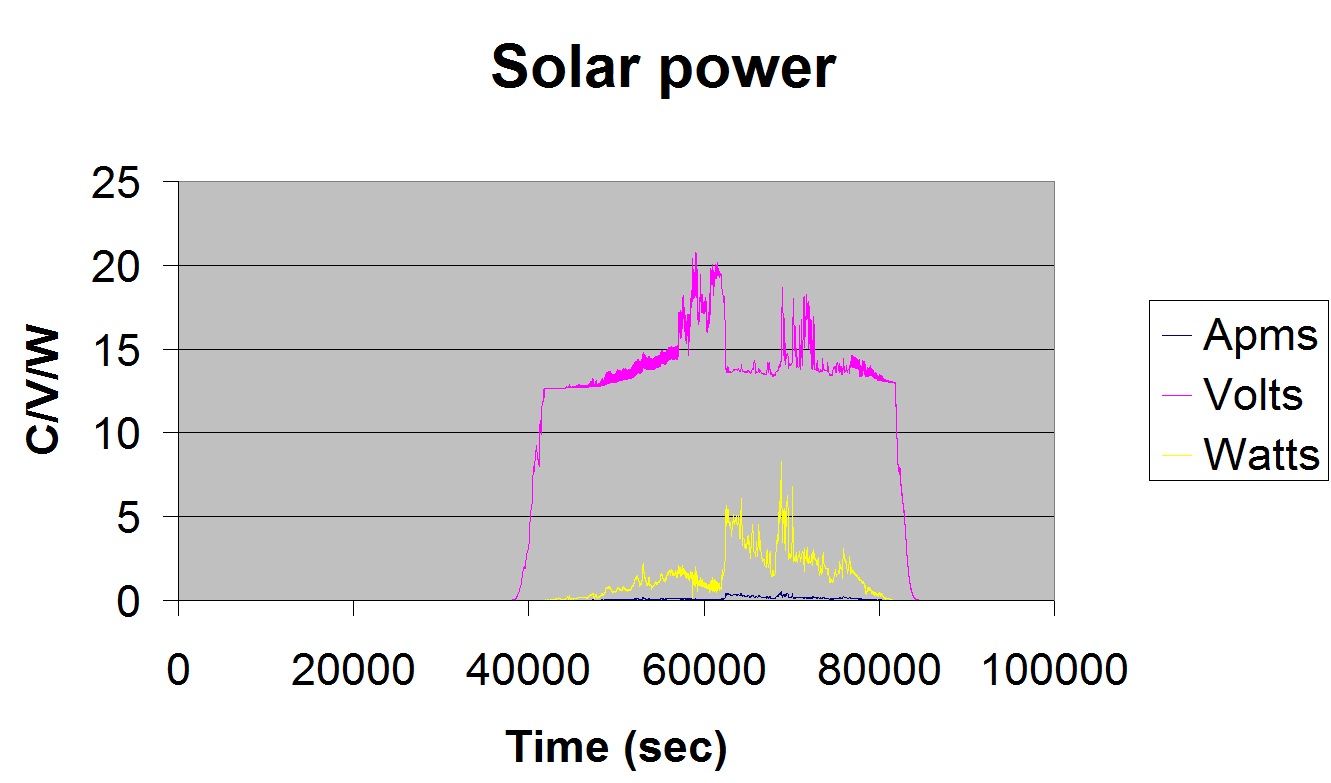 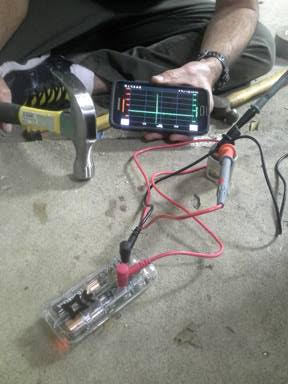 Much fun
First use was monitoring the output of a Geo phone to detect  ASR in concrete. What appears to be a hammer is actually an acoustic wave emitter.
Dan A (http://arcspecialties.com/) 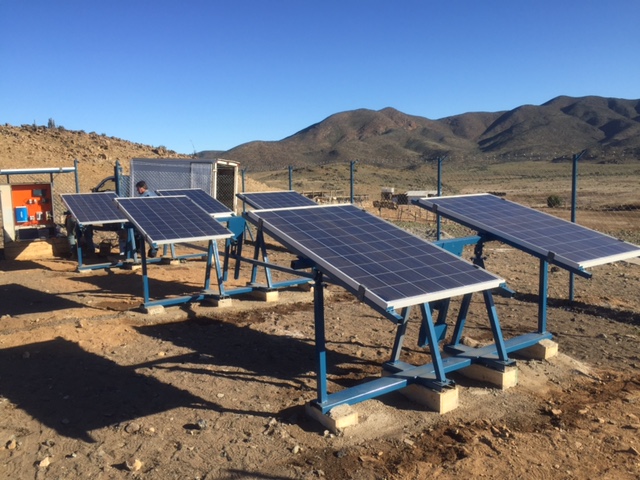 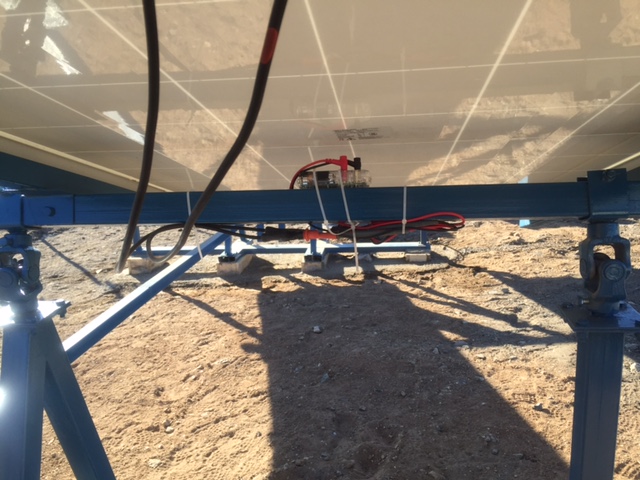 Boat engine rooms are dangerous, loud places to be while engines are running. Thanks to the Mooshimeter, we were able to test the circuit we needed from the safety of the main cabin. Thanks to the logging feature, we were able to play back the results, showing the boat owner the exact problem. He was impressed and we got the job. Mooshimeter, thanks for keeping our technicians safe and on top of the technology curve. 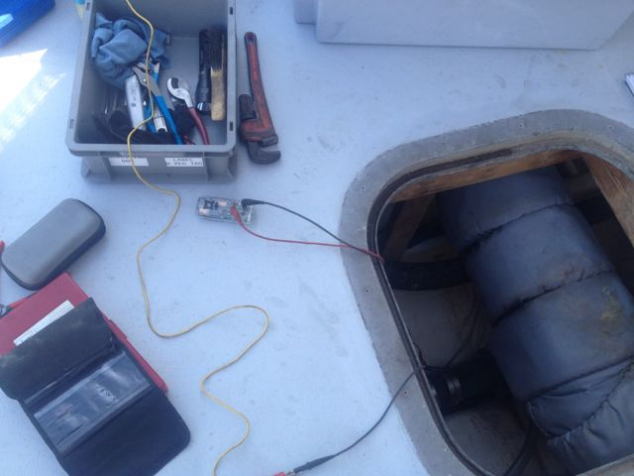 Marine corrosion surveys require sensitive testing equipment and small voltage differences can indicate big problems. The Mooshimeter is sensitive enough to record the small voltages in galvanic couples, and the graphing and logging feature allowed me to test various underwater metals without climbing out of the bilge to record the values each time. It is a great timesaver and results in a much more accurate survey.

I was troubleshooting the ECM system on a new ATV vehicle. The engine was hesitating and a potential fault was the throttle position sensor. It delivers a sensitive low DC voltage output, and the output needs to increase smoothly from 0.665 to 3.600 volts as the vehicle accelerates. I own an expensive yellow meter and a Mooshimeter. Using the yellow meter would have forced me to check the sensitive output while driving the vehicle. Choosing the Mooshimeter allowed me to tap into the output and ground, secure it into the harness, and test ride the ATV while logging the TPS output. When I returned to the shop, I downloaded and reviewed exactly what I needed. 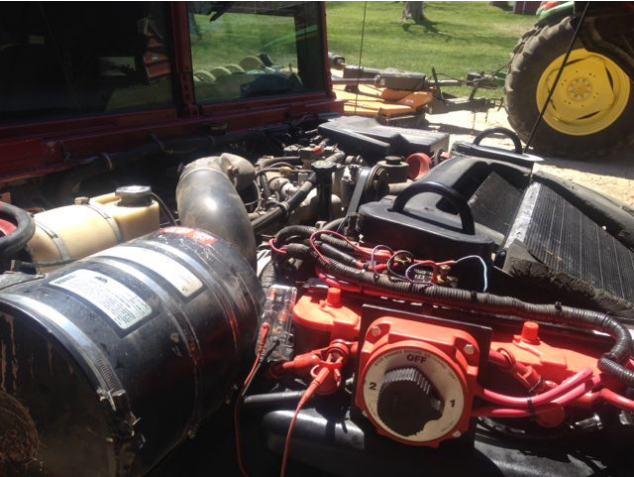 While troubleshooting a HUMV brushfire truck, I had to test voltage drop over the starter cable. Thanks to the Mooshimeter, I was able to secure the meter and test the circuit from the drivers seat without worrying my expensive yellow meter, balanced where I could see the display through the windshield, would fall into the alternator belt and damage the vehicle or my meter. Also, I was able to take a screenshot of the test for the after action report. It is an emergency vehicle and having a record of this information is invaluable! 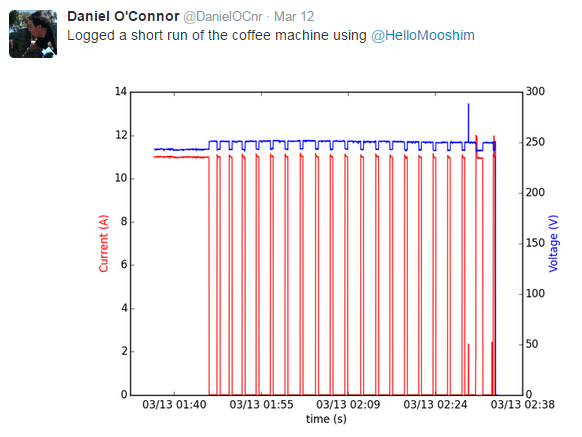 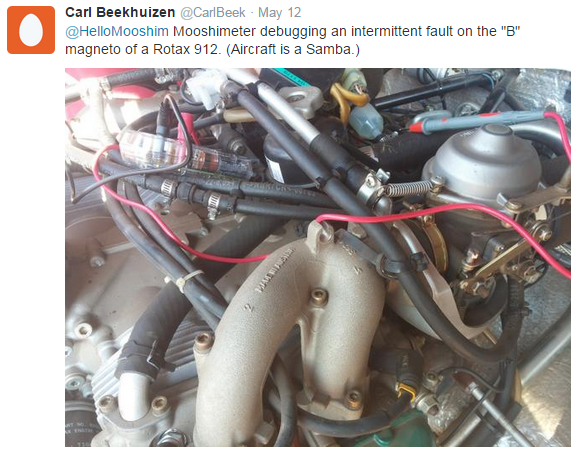 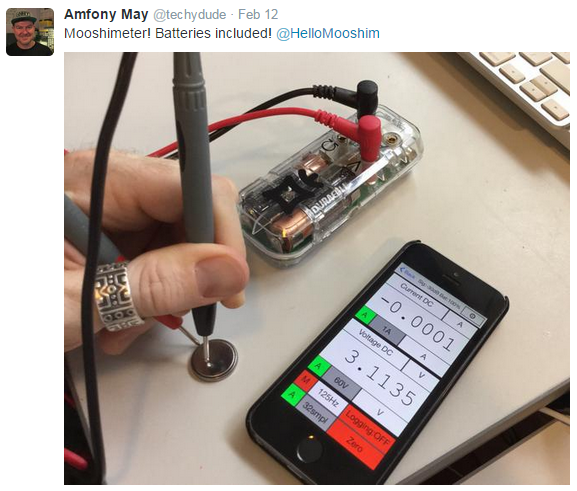 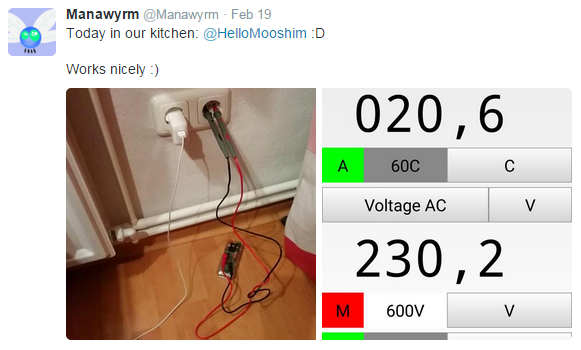